I had just sold a box of peaches to a couple, when I noticed that the girl was wearing a necklace featuring a portrait of Queen Elizabeth II. As I was handing over her change, I mentioned it, saying "Ah! You have a British Coin!" She corrected me saying, disappointedly, "Oh. I though it was Canadian." And I realized that it was, after all, a Canadian coin.

This initial exchange opened up the conversation to a level of friendliness that enabled the guy to look at my hair, point to his own and say, "I'd like to get Rastas too..." I told him that it was not that difficult, and that he could indeed have one that very day, since mine were in the process of being removed - by anyone who mentioned them to me. He was very happy to cut one off, and especially keen to keep the lock. 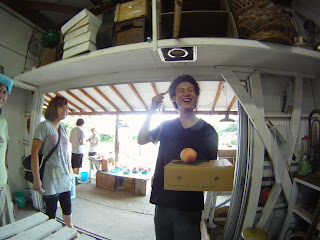 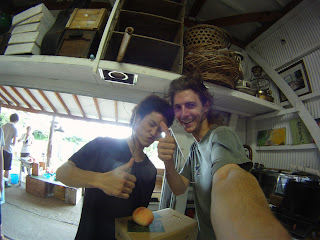 I asked what he wanted to exchange for it, and he and his girlfriend went to the car to find something to exchange for it. They came back with one of the most bizarre objects of exchange in the whole project: a hairband featuring a bright green flashing Minnie-Mouse style bow, which Jii took a great liking to. 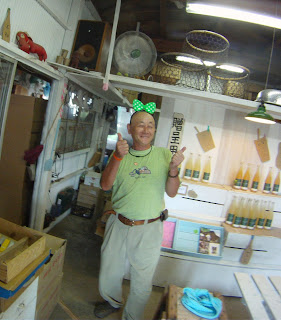 They also gave me a figurine in the shape of an athropomorphic warthog.

There was now only one dreadlock left to cut.
Posted by Sparky at 3:30 PM