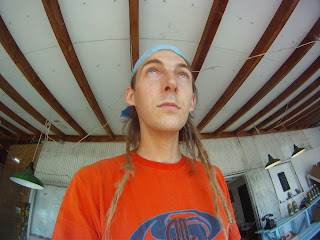 At the peach shack, I was waiting, as had become usual. I was waiting for people to come and take an interest in peaches, so that I could give them some to taste, or show them to the pick-your-own orchard, and I was also waiting for people to take an interest in, or at least make some mention of, my rapidly diminishing supply of dreadlocks, so that the summer heat would continue getting less and less oppressive, and so that the strain on my neck would continue to diminish. 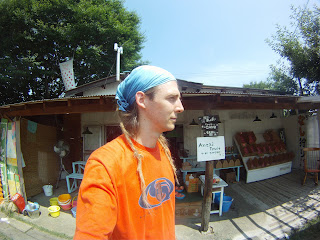 Just as I was beginning to think that I could no longer bear the heat, a family of 3 - mother, father and son - showed up and started talking to me. They were enjoying their holiday in sunny Fukushima, and told me all about it. The mother made a nonchalant mention of my hair, something along the lines of "so tell me about your hair." Upon the appearance of the scissors, which I produced, as usual, from my pocket, her immediate reaction was, "no, I couldn't possibly cut it!" and she handed the scissors to her son. He too was tentative, but I insisted that since I only had three dreadlocks left, it would be a huge favour to cut one more off. It was the father who eventually cut off a dreadlock: he seemed to have no qualms about its removal. 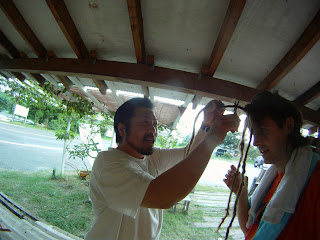 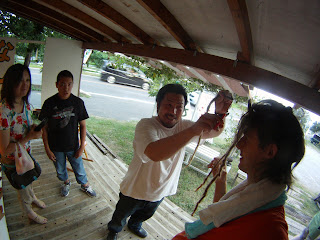 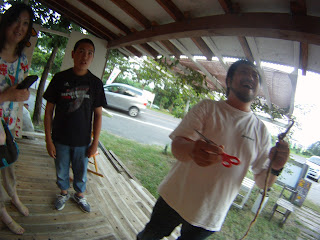 Although the mother was not initially keen to keep the dreadlock, Shinya the peach farmer came and suggested that she keep it as an o-mamori (protective charm) which, as I explained, was a similar fate to that of many of the other dreadlocks. 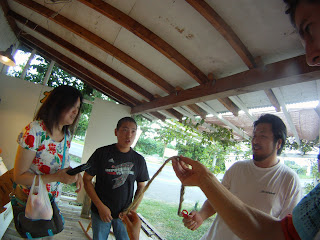 She tied it to her handbag, and then started searching in her bag for something to exchange for it. This search proved fruitless, but the family were all concerned that something of value should be exchanged for the hair. So the father handed me his zippo lighter. I thought at first this was a rather valuable, but he insisted that since it had taken me 9 years to grow, such a valuable item was worth the exchange. Shinya's father told the family that he too considered it Mottainai to exchange the Zippo, but I explained to all those present that many people had told me it was Mottainai to cut off any my hair, so it was rather appropriate to exchange a lock for something else that was Mottainai. Perhaps this is the secret of bartering. 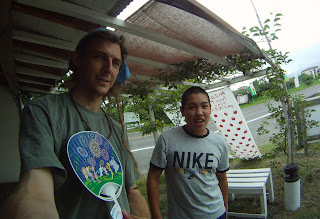 The next day, the family returned on their way home from holiday, and presented me with a plastic fan. This kept me cool while I waited for the next dreadlock removal.