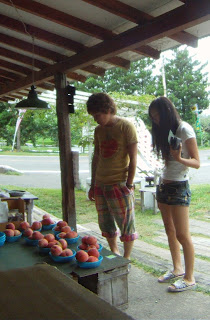 As the young couple approached the peach shack, I had a subtle feeling of "This is it!" And indeed it was. After asking where I was from, the second comment he made was "that's cool!" which he said whilst making a gesture in the vague direction of the side of his head. I asked him what exactly he thought was cool, and he answered, "hairstyle". So I told him my spiel as I got my scissors out and handed them over. 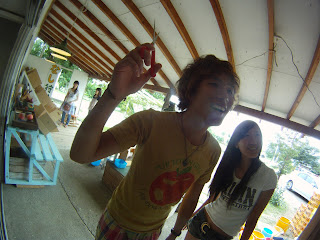 As Daiki (for that was the cutter's name) excitedly brandished the scissors, I told him that I had had 42 dreadlocks, and this was the last one to go. I repeated this a couple of times loudly into the peach shop, and was answered with a loud cheer. Shinya came out playing the guitar, and there were general diverse celebrations. 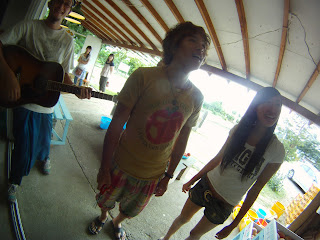 I was very excited: this truly felt like a momentous occasion. Daiki positioned the scissors close to the root and skillfully snipped through. 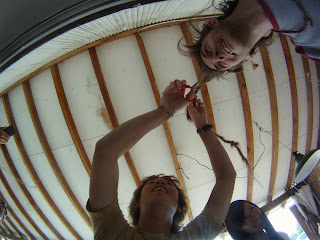 Suddenly, after 9 years, I was no longer a person with dreadlocks. 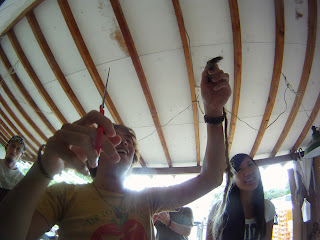 Daiki seemed to want to keep the lock, so I asked him what he would exchange for it. 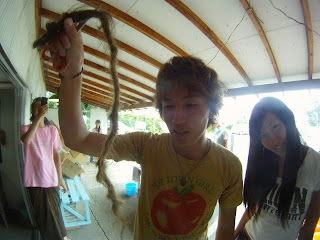 Neither he nor his girlfriend believed they had anything with them worth swapping for it, so they went out to have lunch, promising to come back with something to exchange.
After a fair while, they came back and presented me with a packet of abura-tori kami: paper with which to remove excess oil from one's nasal pores. I was not sure that I needed this, but it seems to be a common gift in Japan. 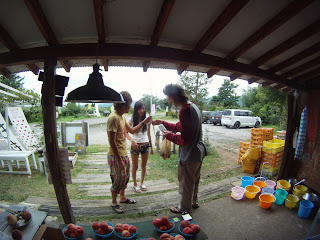 I sold them some peaches and put an extra one or two in, and after a bit more conversation, they went on their way back to Tokyo and left me dreadless.

I felt free - not just to be rid of my hair, but to have come to the end of a long drawn-out series of performances that could start at any time.

The final stage in the process was to get rid of the remaining hair. Being in Japan, this turned out to be a proper ceremonial occasion.