A group of people came into the peach shop. I had the feeling I had met them before, and they chatted to me in a familiar way. After a bit of conversation, the mother of the group, an excitable and loudly-spoken lady, waved her hands vaguely round her neck area and said something referring to my hair. I produced them with my scissors, which caused much mirth, and some disbelief about the next logical step. 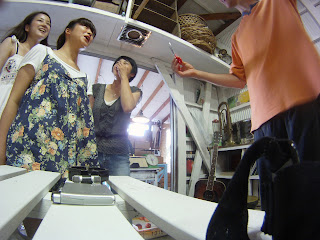 The group seemed to be friends of Ji, who was also hovering around with an air of excitement. I wondered if Ji was in on the act: perhaps he had sent the group to me from the café to ask about my dreadlocks. Ji seemed fixated on increasing the frequency of dreadlock removals. I asked the group directly whether the hair question had been planted, but they assured me that they had no idea what was going on. Since I had no evidence for or against Ji's direct involvement in this encounter, I did not worry too much.

We went outside into the light for the cut, and the girls looked on, seemingly intent on creating a party atmosphere...


Having cut off the dreadlock, the mother assured me she did not need it, but implored me to keep it safe and take good care of it. 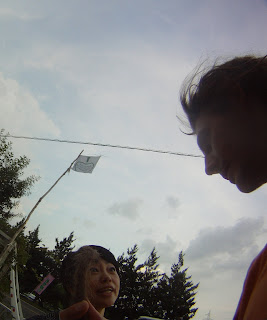 So this is one dreadlock that I still have.

The same cannot be said for the next one to be cut off.