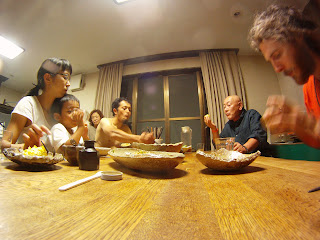 We were sitting down to supper at the end of a day's work on the peach farm. The peach farmer's mother sat down next to me and asked me how long I had been growing my hair. This prompted my spiel, which seemed strangely formal in the context of a family meal, and this in turn prompted a general conversation about my hair. The peach farmer, Shinya, who had himself mentioned my dreadlocks for the first time that very morning walked in on this conversation and realized from the topic of conversation that another dreadlock cutting encounter had been triggered. My hair, being the topic of conversation, was in the process of being mentioned when Ji, Shinya's father came into the room. Joining the conversation, he asked if my hair was extensions, and I responded by telling him that no, it was my real hair. Shinya got very excited at this point, believing that yet another hair mention had occurred. However, since my hair was already the topic of coinversation, I realized that Ji's comment did not count as a trigger. It can only be an unprompted mention of my hair that acts as a trigger for its removal, otherwise the whole lot would be off in one go, which would defeat the entire point of the process. Ji subsequently caused (or attempted to cause) a variety of chaos in my implementation of the process. He would come and talk about my dreadlocks as I was selling peaches, prompting customers to take an interest and mention my locks, in an attempt to speed up the process. He did not understand for a while that in fact, what he was doing may have delayed the process, as he was inadvertently removing cutting eligibility from anyone he mentioned my hair to. After he realized that he could not mention my hair, he would still come past and flick my hair, or point to it grinning, in an attempt to draw attention to it. But he had little luck with this, and the process continued organically.

Ji's mischievousness notwithstanding, his wife's mention of my dreadlock did eventually result in her cutting a dreadlock off, a couple of days after her mention of it. By this time, she had got quite used to the idea of dreadlock removal, and after a brief stumble over the thickness of the lock that I recommended, she cut it off with a few snips of the scissors. 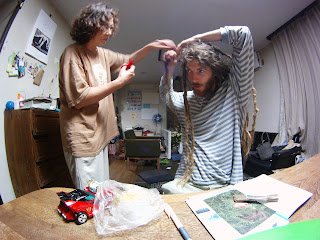 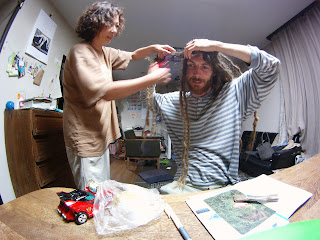 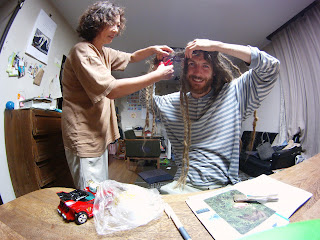 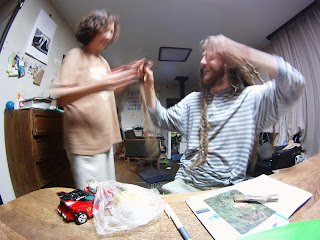 When I asked Shinya's mother what should be done with the dreadlock, she firmly stated that she had no need for it. She left it to me to decide. 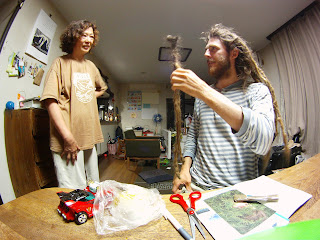 After the cut, I felt a deep release of tension, further reinforcing the belief that the scalp and hair store a tangle of feeling. A big load of locked-up feeling was oozing through my scalp. 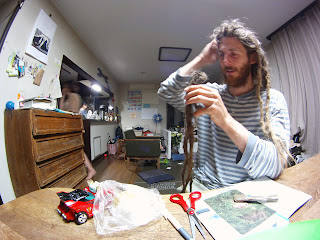 I initially thought that it might share the same fate as Shinya's dreadlock: to be hung in an apple tree. But the next morning, I was doing some construction work when I suddenly realized what needed to be done with the lock. My colleague Nikaido-kun and I were building a new floor in the peach stall. 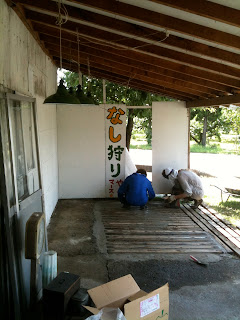 We were spreading cement in between wooden slats, creating a wood and concrete floor. I was wondering what should be done with the dreadlock that had been cut the night before, when I suddenly realized: this was the place!


The hair was placed in between the wooden slats and covered in cement. 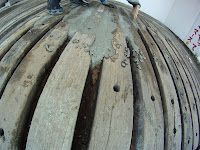 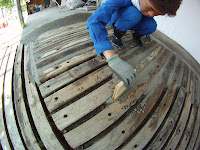 Old farmhouses in Wales have been found to contain hair, shoes, and even in one case, the carcass of a cat. These were perhaps thought to be good luck, so I anticipated that embedding a dreadlock in the floor of the peach shack might bring good luck to the peach sales that summer. This dreadlock thus became, like many of the others, a form of o-mamori, a good luck charm or talisman.

The next dreadlock to be cut was not so highly-thought-of.