It started in the workshed, on the morning of my second day of apple thinning. 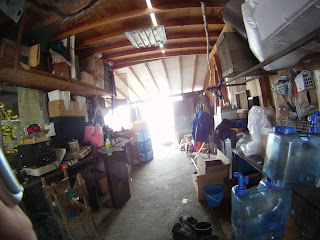 I had arrived at the Anzai Kajuen fruit farm and had been accepted pretty much as I was, by pretty much everyone there. Nobody noticed that the dreadlocks were already fewer than the alotted scalp space. But why should they? I thought for the first day or so that the Anzai family would be so unassuming that my hair would never be mentioned and I would have the rest of my dreadlocks for the rest of my life.

So when Shinya the farmer casually asked, while I was donning my overalls on the second day, that I had very long hair, I was taken aback. When the trigger for a performance is outside of ones own control, one has to be extremely vigilant at all times. On this occasion, as on many others, I was caught unprepared. My camera and recording devices were packed away indide the house, but were I to rush inside and retrieve them, the moment would be gone, and I would have to explain my sudden absence from the call of apple-thinning duties.

I also realized that since I was due to be at the farm for some weeks, the actual cutting could take place later on, or even the following day or week. So instead of running, I continued the conversation, and told him briefly that anyone who mentioned my hair would be asked to cut one off. (Shinya later told me that at that point he thought 'Ah! I bet this is one of his performancey things')

Since the apples were calling to be thinned, we agreed to do some 'talking' later on, which also implied that we might do some hair cutting.

I approached Shinya during the lunch break, thinking that would be a good time for a dreadlock removal, but he again said 'no, let's talk slowly when there's time to relax'.

In the heat of that afternoon, Shinya tired of apple pruning, and we went up to a cool place into the woods beside a little stream, where I explained to him all about the project so far. Being dressed for apple pruning rather than dreadlock pruning, I had with me neither scissors, nor recording equipment.

The actual cutting took place approximately 36 hours after the original comment was made. It was a somewhat ceremonial occasion, and took place on a hot evening in the living/dining room, after most people in the household had gone to bed. 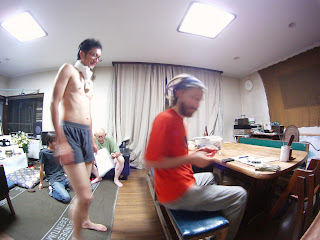 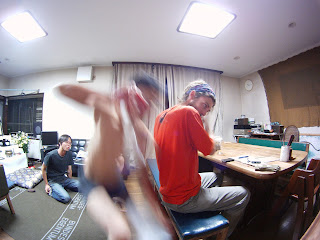 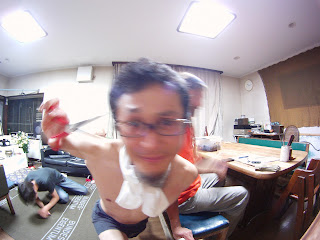 After a little introductory dance, 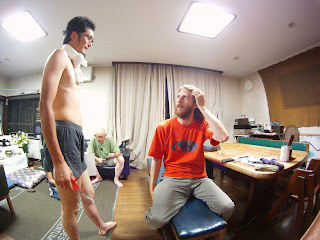 and a discussion of technique, 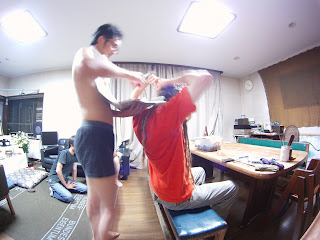 
Holding a piece of newspaper to catch any loose hairs, he happily cut the dreadlock very close to the root. 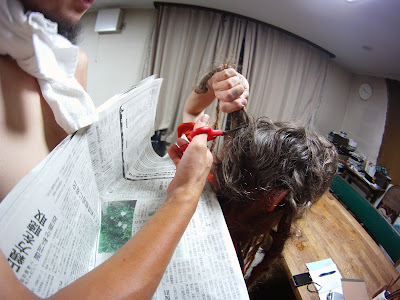 The lock that he cut was the second of the double-length locks that I had tied another cut lock onto. It also had a stone threaded onto it: a bead-shaped stone that I found on Worthing beach in the early 1990s. Perhaps I should have left this stone on the dreadlock, but I had an idea about a use for it, so we removed it from the dreadlock, for which it was necessary to cut the dreadlock to free the stone. 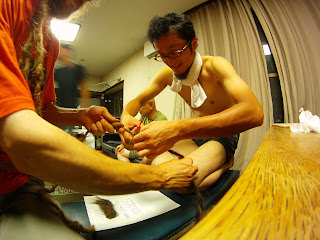 Shinya knew immediately what to do with the resulting dreadlock. In the organic apple field, we had been spending a lot of time removing hoardes of hairy caterpillars from the trees. Taking the dreadlock into the orchard and tying it around a tree trunk would provide an O-mamori – talisman or good luck charm – to protect the orchard against the hairy intruders. 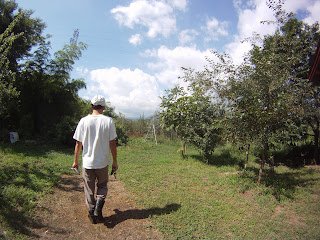 The choice of tree was also obvious: a power-spot tree where we had met a large contented frog and various beautiful insects as well as numerous caterpillars. 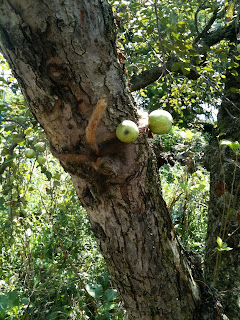 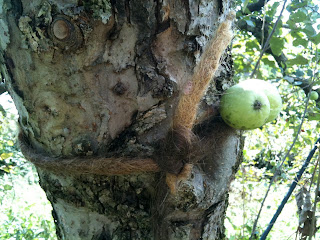 By this time, more comments - and cuts - had been made by other family members, so it was general knowledge what was occurring. Now that people at the peach farm knew, I knew that it was only a matter of time before the final cut.
Posted by Sparky at 9:00 AM