I had arranged to meet up with my friend Joel outside a knife shop. It was a good landmark: somewhere we both remembered, and not such a place as we might not be able to find each other, such as the tourist-thronged Kaminari-mon temple gate. It also turned out that outside a knife shop was a highly appropriate place for the subsequent encounter.

Joel had just turned up when I caught the eye of one of a group of three men and one lady, obviously on their way from a business meeting to the night life of Tokyo to conduct the real business transactions. They happened to run into me, however, and so unwittingly became involved in a transaction that none of them could have anticipated.

The initial trickle of conversation gradually became a flow, and we got talking about provenance, travel, lifestyle: the usual sort of topics. It was the man in the middle of the group who came out with the comment, "Your hair is, of course, a wig, is it not?" 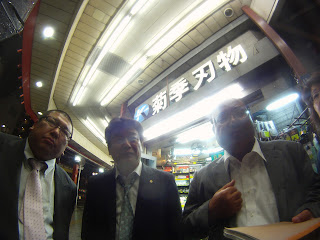 I told him no, and commenced with my spiel on what I was doing and how I was doing it. I included in my explanation the requirement that the lock be cut at the root. The middle man immediately took my scissors from me and aimed for the root of one of my dreadlocks. 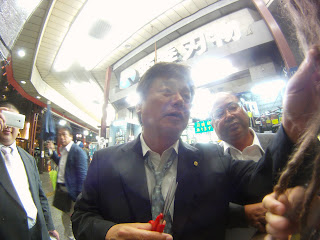 He assumed for some reason that I only wanted one hair cut. Equivalent things had happened before. Was it so difficult to believe that I wanted a whole dreadlock cut off? 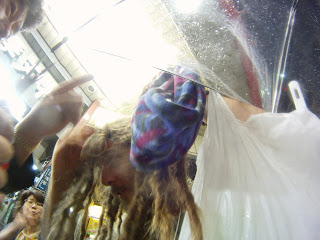 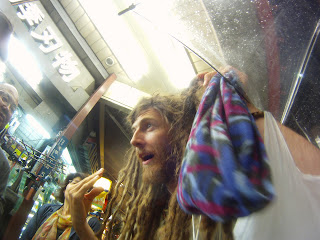 I explained persuasively that a whole dreadlock must be cut clean off, and the man suddenly became extremely reticent. "No, no," he said, "I can't do that." 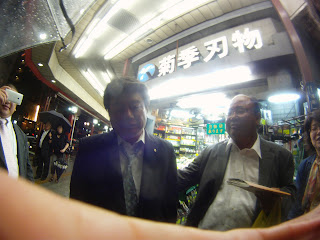 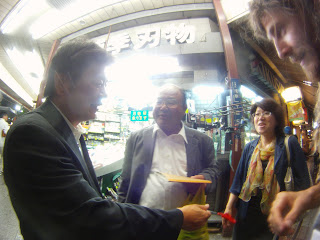 I wondered if I was offering too thick a lock to be cut, and found something smaller and thinner, but still the man could not do the deed. He passed the scissors to the bald man on his left. 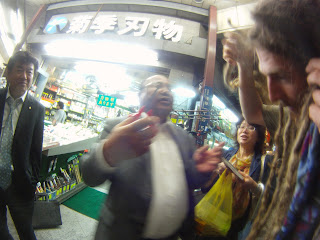 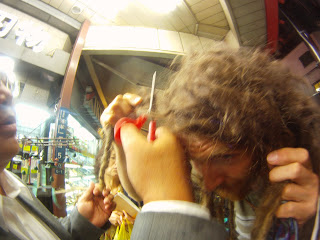 The bald man joyfully took the scissors, snipped clean through the smaller dreadlock very near the root, and proceeded to adorn his own head with his new-found hair. 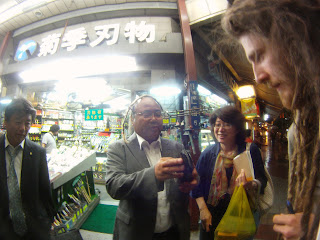 He most certainly wanted to keep the lock, so I asked what he might want to exchange for it. He immediately produced a crisp new 5000 yen note. 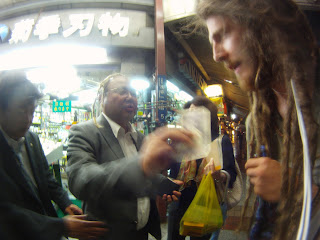 My initial thought was that money was not allowed as an exchange item in this project (Guerrero Marquez had been of the same opinion) so I refused. The man then offered me his business card, but I did not immediately think of this as a fair exchange for the 9 years it took me to grow my dreadlocks. Thinking about this in retrospect, the bald man probably took far longer than 9 years to get to the high position of respectability that appeared on his card. So perhaps it would have been a fair swap after all. It was probably very disrespectful of me not to accept his business card, but since I was giving him (and everyone else I met) my own business card, I wanted something more appropriate, in exchange for the dreadlock itself. At last, he offered me an ultimatum: take the card or the 5000 yen. Offered this choice, what could I do but accept the money? 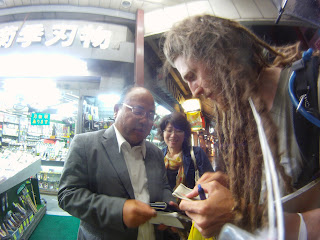 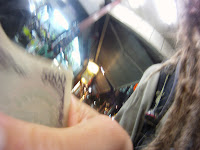 I realized that at some point I would be able to purchase with it something highly relevant to my cause: something like a head massage - to undo all the scalpal stress of 9 years of dreadlocks - or a hair clipper. 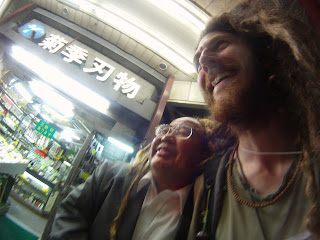 The bald man's colleagues looked on at this bargaining, and I believe we all left feeling much the richer for this uncommon and unique exchange in an appropriate place.


Resisting temptation the following morning, I kept the 5000 yen note in my bag of swapped objects, and eventually purchased a portable battery-powered hair clipper with which I can now keep my scalp nicely trimmed, for the purposes of website construction, and surprising family members.
Posted by Sparky at 7:30 PM

Email ThisBlogThis!Share to TwitterShare to FacebookShare to Pinterest
Location: Outside a knife shop, Asakusa, Tokyo Taito浅草１丁目５−１