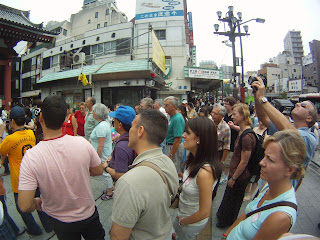 I was waiting near the Kaminari-mon in Asakusa, surrounded by the groups of tourists who frequent that place, when suddenly I noticed a man from one of the groups walking towards me, pointing his camera at me. I tried to ask him why he wanted to take a photo of me, but he spoke neither Japanese nor English. 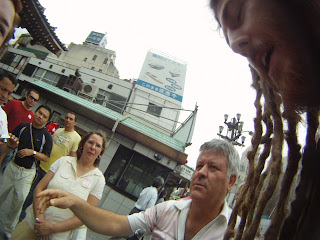 As he and his family lined up for a photo with me, his daughter explained that her sister liked hippies. I feigned mild offence, and asked if she was calling me a hippie. At this point, the girl mentioned my dreadlocks, thus setting the process officially in motion. I thanked her in English, and explained that my hair was gradually being removed by people who took an interest in it. Since there was a family involved, I selected a lock that split into 3 ends, and invited the girl to remove it using the scissors that I also gave her. Having cut the lock, she naturally wanted to keep it to give to her sister, so I asked what she might want to exchange for it. Her father gave her a warning glance, as if to say "that's not worth anything!" but then the girl had the idea of allowing me to cut off a lock of her own hair in exchange. 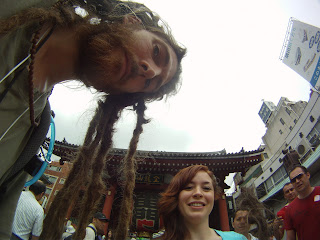 It was then her mother's turn to get worried - about her having bits of her hair cut off - but the girl insisted it was OK, and asked me to proceed. So it was my turn to step into the position of the cutter. I came to understand the feeling that most of my cutters seem to have - I don't want to cut off too much of your hair...


Apart from my Japanese Visa application, the scissors had not been used for anything except cutting my own hair. The girl was grateful for the exchange, as she had a nice big dreadlock to take home to her hippie enthusiast sister, and I had a lock of another person's hair to add to my collection of strange objects. 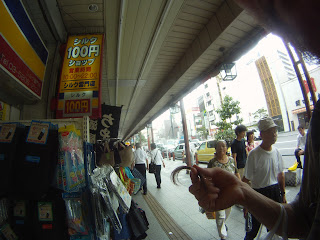 The next Encounter took place nearby, seven hours later.
Posted by Sparky at 12:30 PM