Once again, I found myself waiting for some friends next to the Kaminari-mon. A man approached from my left, speaking in English. I replied in Japanese, and he started asking me all sorts of things. 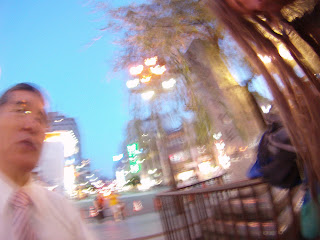 His first question to me was, "Are you travelling around the world?" I told him that indeed I was, but he did not believe that I had come from England by train and boat. When I detailed the journey I had made, and listed the places I had been, however, he realized I was not joking. He then asked if I had grown my hair since I had started travelling. I thanked him for noticing my hair, and told him my spiel, explaining what I was doing, and I pointed out that it had taken me 9 years to grow my hair. He did not seem to take much persuading, and selected a dreadlock that I had plaited together from 3 separate ones. When he had cut it off, I asked him what should be done with it. 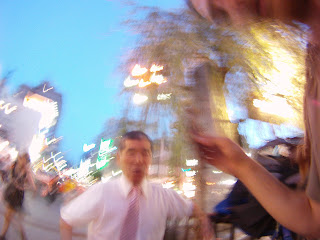 He was very clear about this: "Why, you should keep it to give to someone!"
"Who?"
"Give it to your girlfriend as a keepsake!"


The man's female companion agreed that this was probably the best idea, but at the time I did not have a girlfriend, so I started to wonder what this could mean for this dreadlock. I considered that if I were to give it to any new or prospective girl or lady friend who I might encounter, this might be considered rather strange or inappropriate, especially if such an encounter were to occur after my head had returned to a short-haired or shaven state. Such a prospective lady friend may well not see me as a person with dreadlocks: this part of my history would be strange or unknown to her, and to give her some hair of mine from years ago might seem strange or even needlessly nostalgic. But I have an idea of who to give the lock to: should she accept it, I would give it to a lady friend who did share some of my dreadlocked history. 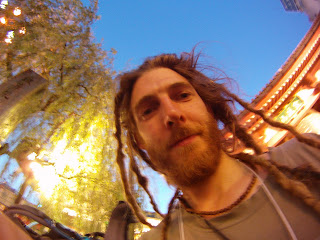 For the time being, it was time to move on to the next Encounter.
Posted by Sparky at 7:30 PM