I saw Joel in the distance, walking past a willow tree, and yelled to him from the kaminari-mon gate where I was waiting. He and Chris headed over to me, both glad I had waited for them. 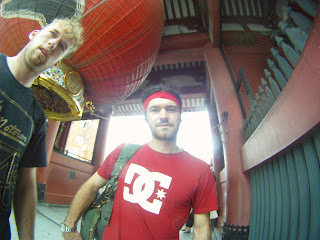 I had not seen Joel since leaving Beijing, and although I had hinted to him that I may have plans for hair removal, I did not reveal to him the details of the project. So when, under the Kaminari gate, he said to me "You've still got all your hair!" he became eligible to cut off one of my dreadlocks. I told him of his eligibility, and of the general details of my project, and he cut off the lock that I recommended, one with a loop in the end which protruded from in front of my right ear. 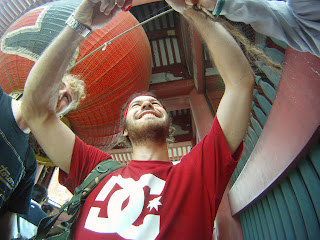 He decided to tie it to his rucksack while he thought about what to do with it. 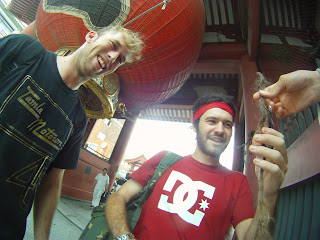 Chris was unfortunately not eligible to cut a lock, because he had found out about this project when Joel mentioned my hair.


We had arranged to go on a journey to the Nikko area north of Tokyo, and climb a holy mountain called Nantai-san. On the way up the mountain, we passed a shrine building bound with a rice-straw rope, and I mentioned to Joel and Chris that I had considered and made use of the similarity between rice straw rope and dreadlock. Joel said, "Why don't we hang this one here?!" So we found a space between two ricestraw strings, and Joel tied the dreadlock in the space, where it was a perfect length and colour to fit in with the other rice straw strings. 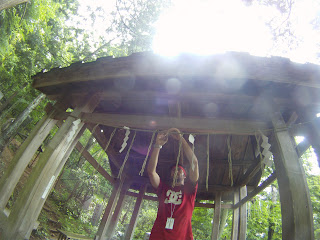 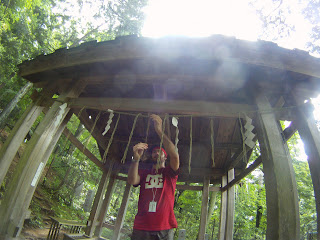 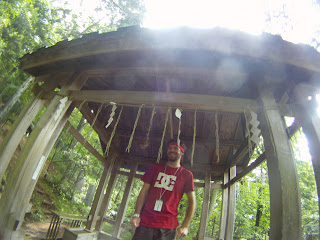 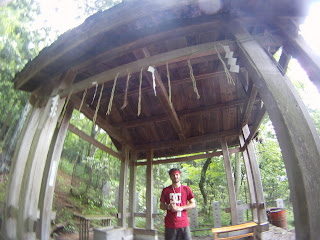 It wasn't until Joel and Chris had left and gone back to Tokyo that I had any more encounters.
Posted by Sparky at 12:00 PM