I was waiting for friends in front of the Kaminarimon (Thunder Gate), fanning myself in the heat of the morning, when there appeared to my right, a short weathered-looking man, who announced himself in Japanese as homeless: he had been so for about five years. He took my fan from me, and took over the fanning. 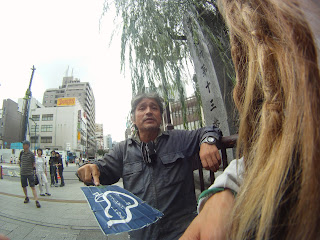 As he fanned me, he talked to me, telling me how difficult it was to be hungry when no-one gave him any food. So I got a dorayaki - a bean jam cake - out from my food bag and gave it to him. He started to eat it very thankfully, and suggested we go and sit under the gate where it was cooler in the shade. I told him my friends were already an hour overdue, and he said he thought they probably wouldn't turn up. We chatted about various things: his life living under a nearby bridge, the times I had spent in Japan, the fact that from the pattern of the clouds we could see that it would probably rain today, and the various frequencies of tourists: Japanese, other Asians, Westerners, and Aren't-there-a-lot-of-Americans-around-these-days?
At some point, the man asked me a direct question about my hair: something like how long had I been growing it? So I did my spiel and passed him the scissors, and he agreed without much persuasion to cut one off. 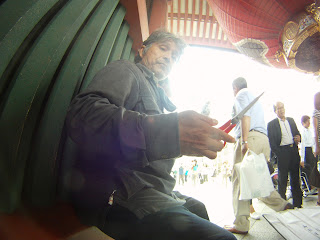 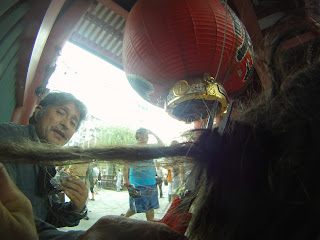 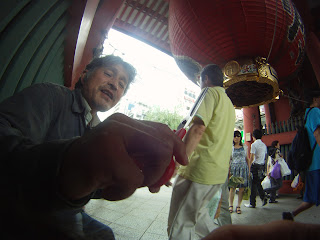 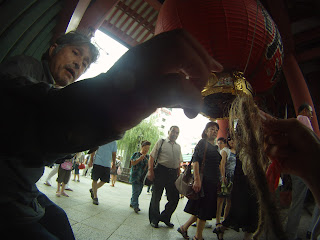 During and after the cut, a lot of passers-by seemed to stare. I wondered if more people might come and mention my hair, but they seemed to treat it more as a spectacle not to get involved in. What must they have thought? That a homeless man had set up a hairdressing salon right there under the Kaminari Gate? 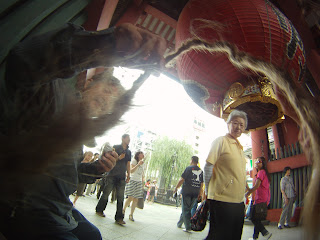 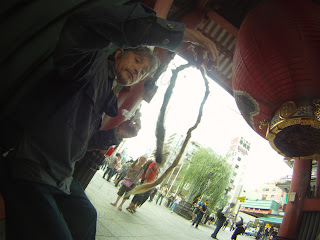 Upon the removal of the dreadlock, the homeless man first said that he would keep it as a keepsake (kinenhin). But later in the conversation, he said that he would go and tie it to the omikuji rack along the street at the temple, Sensouji. Omikuji are the fortune papers that visitors buy at the temple. Having read one's fortune, it is the custom to tie these papers to a rack (or at some temples to trees) and it was this rack that we agreed it would be a good idea to tie the dreadlock to. Since the cutter was not planning to keep the dreadlock, and since he was, after all homeless, and looking for support, I did not feel right asking for something in exchange for the dreadlock. In a way, it was as if this was an exchange in reverse: I paid him in dorayaki to cut my dreadlock off. 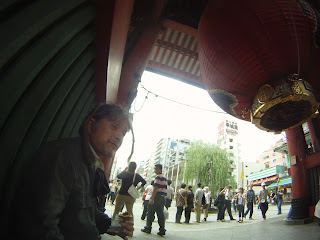 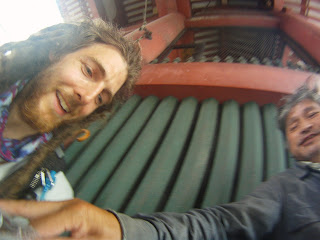 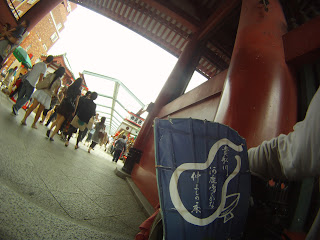 By and by, my new homeless friend left me to wait for my friends, and wandered off down the street towards Sensoji, saying that he would tie the lock to the omikuji rack. It seems that the rack is cleared of fortune papers daily, and since I did not go to Sensoji until a few days later, I never found out whether the dreadlock was tied to the rack. I wonder where it ended up.