I was wandering the streets of Kamakura looking for somewhere to wash my clothes and somewhere to sleep. I passed a bar with music playing and went in to ask where I could find a coin laundry. There were two guys hanging out there but no customers. They were unable to tell me a direct "no, there is no coin laundry" as that concept is almost impossible to express in polite Japanese, but when I said, "I guess it looks like there is none," they agreed. I was just about to leave when the guy behind the bar said, "you have nice dreads."

I told them my spiel, and after I quashed their suspicions that I only wanted half a dreadlock cut off, they agreed to cut off a whole one. Appropriately, they selected one dreadlock with two prongs, and cut it off nice and close to the root. 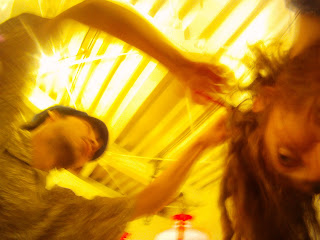 They definitely wanted to keep the lock to have at the bar, so I asked what they would exchange it for. They really were not sure, but looked around the bar, as I told them anything would do. They eventually settled on a small soy sauce dish. 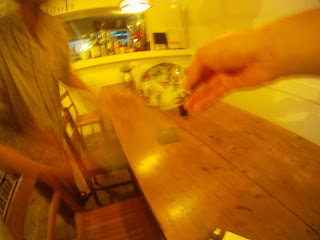 As one of the guys handed it to me, he told me "Koreha Very Old, desu yo" and explained that it was from the Edo period. I felt this was rather a generous swap, but realized they had swapped a precious object for a story to tell. Objects may not be interesting in and of themselves, but when there is a story attached to them, their percieved value increases no end. I thanked them profusely and went on my way, still carrying my bag of dirty clothes and my bag of strange objects that was filling up little by little.