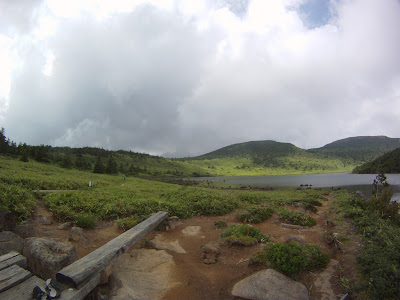 I was sitting having lunch by a mountain lake when I heard a familiar-sounding voice say "Kirigirisu-jin desu!" - It's the grasshopper man! 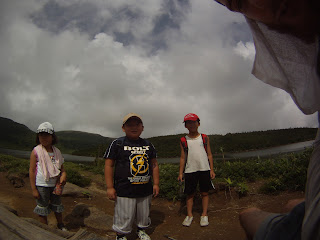 The voice belonged to one of a small group of elementary school students. When I had passed an hour or two before on my way up the trail, I had made a pun on the similarity of the Japanese words for grasshopper-man and Englishman. The boy who spoke and his buddy asked me what I was eating, and other questions concerning the colour of my eyes, the nature of life in England, and so on, and then the kid on the left asked me "did you grow your hair?" I replied in the affirmative, and thanked him as I reached into my pocket, from where I produced my scissors. 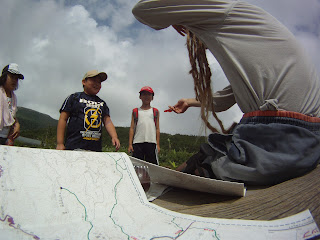 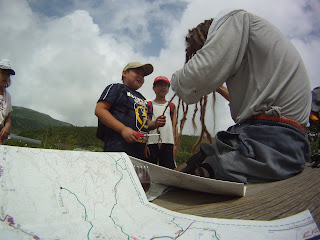 As he took the scissors, I asked if he would cut my hair. He seemed incredulous and hesitant, so his friend (who had initially spoken) grabbed the scissors from him and between them, they selected a dreadlock to cut. I challenged them on why they wanted to cut that one in particular, and they said "because it's brownish". I went through the hairs further back on my head and found one that was rather more brownish, and was also two dreadlocks combined in a single root. I felt that since there were two of them, this double lock was a more appropriate target. 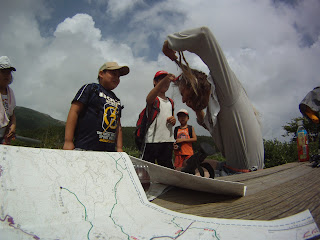 The kid who did the cutting went straight in for the root, and almost got my finger off as I was holding the dreadlock. The deed was done in two snips, and I held up the hair and asked if the kids had any need to keep it. 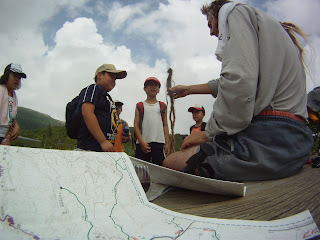 They most emphatically did. As I handed it over, I asked what they might like to exchange for it, and their teacher enthusiastically turned this into a lesson that you can't get things for free: there must be some exchange. The logical things for Japanese elementary school children to swap for anything are snacks and sweets, and with a bit of encouragement from their teacher, who agreed with me that this should be an exchange, they gave me a variety of potato- and sugar-based snacks. 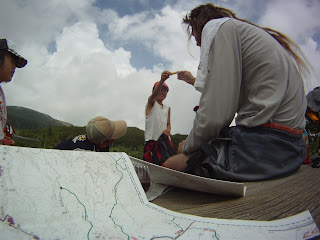 The boys decided to cut the hair in two, so that they had one bit each, so asked to borrow my scissors again. 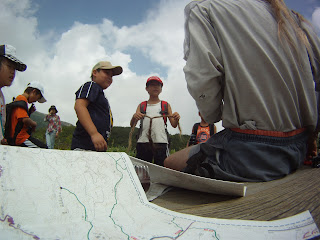 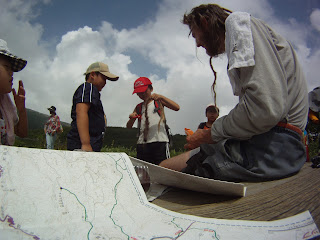 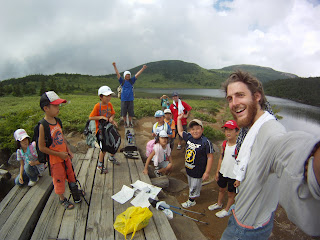 After a group photo, the boys promised to take care of the dreadlocks, and perhaps hang them in their classroom, they headed off around the lake, leaving me to feed the ducks while I finished my lunch.

After walking in the mountains for a couple of days, I went in search of a public bath house. This became the scene for the next dreadlock removal.