I was reading the names of stations on the railway fares display board, trying to work out where my friend Naoya lived, when suddenly a girl was standing to my left asking if she could take a photo of me.


I asked her why, and in answer she said something about how wonderful my hair was. When I asked her to cut off a dreadlock, she immediately did not want to. But I persuaded her that she could take photos of me before and after the cut, and she came around to the idea, cut the lock, and took another photo.

The choreography of this exchange was somewhat strange. At some point, the girl realized we were in the way of people who wanted to buy train tickets, and she moved into the corner. With me facing her, I almost felt I was blocking her into the corner as we conversed. She was initially reluctant to discuss what to do with the hair, but we discussed how the wonderfulness of my hair seemed to have evaporated: now she had cut the hair off, she seemed far less impressed by it than when it had been attached to my head. 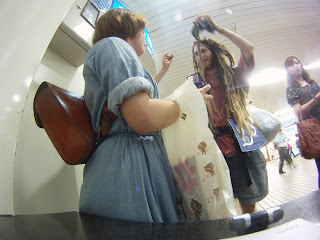 Having no other ideas for what to do with the dreadlock, the girl reluctantly decided to take it with her, and i asked her what she might want to exchange for it. She had a look throught her satchel and came up with an individually-wrapped single square of Aero chocolate. I couldn't help asking her if that was all she thought it was worth - 9 years of hair growth for a single square of chocolate? I eventually decided that if that is what she thought the hair was worth, then why should I argue with her? - perhaps chocolate for hair was rather a good deal. Off she went with the dreadlock she had cut, seeming relieved to be out of an awkward situation.


I left this exchange feeling somewhat fed up with the whole process - who was I to ask people to cut off my dreadlocks? And why should I put people under so much pressure to go through wiuth an exchange? On the other hand, however, she did walk into this by initiating the exchange. I wonder if this girl will be less likely in future to approach strangers for a photograph. I sincerely hope that this encounter did not traumatize her into not speaking to foreigners at all.

Despite, or because of, being in an urban environment, I had very little human contact until two days later.