There were two signs on the door of the bath room: the one above, with red writing read, "No Swimming in the bath!" Below was a sign in black and white asking people with long hair to tie their hair up when entering the bath. 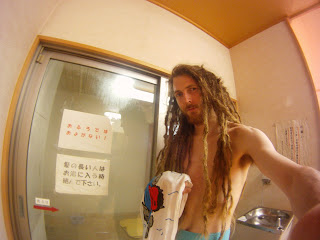 So I tied my hair up and went in the bath. I came out feeling a lot cleaner, and while I was drying, the man running the onsen came into the changing room to tell me it was about time I was out of the bath. He tidied up around me, and just as he was backing out of the room with a pile of towels, he commented that my hair was rather long, and musn't it be awfully inconvenient? At which point I got my scissors out and told him my spiel. He was rather surprised and taken aback, but first of all he assumed I meant him to take a single hair from the end of a dreadlock. I asked him to take from the root, but he still thought I meant a single hair.  When I insisted that he cut off a whole dreadlock, he seemed quite shocked, and very reticent to do the deed.
I think that people are perhaps so impressed or in awe of the length of my hair that they feel it is a pity to have wasted all that time growing it. But from my point of view, none of the time growing my hair was wasted: it brought me a lot of interest and joy - even character, perhaps - and by this time it was time to move on. 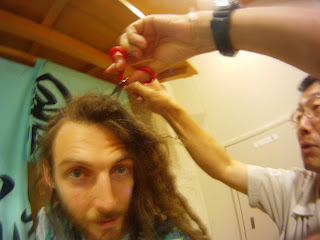 As the onsen attendant cut through my dreadlock, he had a look of pain - or grief, even - it was almost painful to watch him. When the lock was removed, the man cradled it like a thing of great value. I asked him what should be done with it, and he said immediately that it should be kept at the onsen. 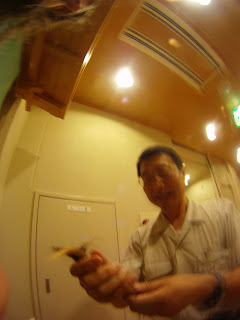 So I asked him what should be exchanged for it, and we agreed that he would go to the reception area and think about it.
After I went back to the reception area, the attendant plied me with rice crackers and sweets of various sorts. When I came to leave, it was raining, and the man insisted I take an umbrella with me. 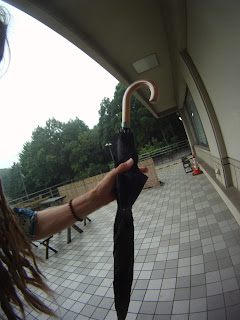 I took this umbrella to be the exchange for the dreadlock, and it has served me well ever since.

That evening, I fled the rain and got on a bus heading down the hill to the city of Atsugi.
Posted by Sparky at 6:00 PM