I was walking through the forest, and came to a road. Having seen the name "Fujiya" on my map a little way along the road, I decided to head for it, hoping that something good would become of my going there. Although the weather was too hazy to see the view of Mount Fuji that gave the establishment its name, I was pleasantly surprised. 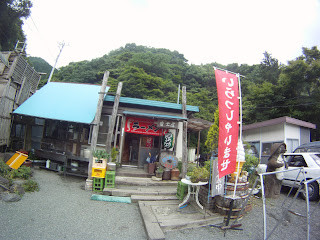 Fujiya turned out to be a ramen shop, so I ate a plate of yakisoba noodles while chatting to the lady who had served them to me. I had packed up my bag and was about to leave when she commented that my hair was rather long, wasn't it? So I set up my camera and launched into my spiel. 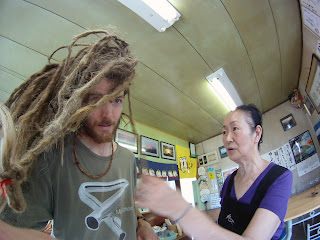 The noodle lady was somewhat taken aback as I did so, but after selecting one of my locks with trepidation, she started to take the information quite matter-of-factly, especially when I explained that having such long hair was rather uncomfortable in such hot weather. 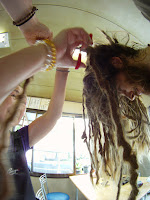 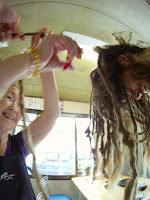 As she got the scissors right up close to the root of the dreadlock and cut it clean through, Mrs. Fujiya assured me that having my dreadlocks removed in this way, I would get gradually cooler as the weather got warmer. Then came the question of what to do with the resulting dreadlock. 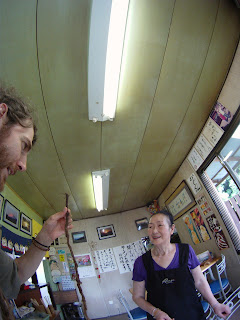 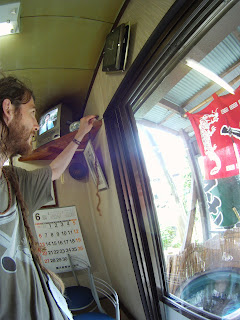 And she said, "Yes, that will be fine!" And so it was! I did not ask for anything in exchange for the lock, as I felt so well provided for by a fantastic lunch, and it somehow felt throughout this exchange like the lady was doing me a favour.


Full of noodles, I wandered back into the woods, and it was not until I got to the next town that I met anyone who chose to mention my dreadlocks.
Posted by Sparky at 2:00 PM