I was walking through the woods greeting everyone I met, when for the second time in one day, someone told me as he passed by that I look like Jesus. I asked him why. About the third word of his answer was "hair", . I told them about my hair and the removal process that had begun that very day. The guy and his female companion were students from China living in Tokyo. They seemed very impressed by my hair, and although that is probably the initial reason the guy mentioned Jesus, he also told me that he thought I would look like Jesus even with all my hair cut off. I can neither agree nor disagree with this, for reasons I outlined in the description of the previous encounter. 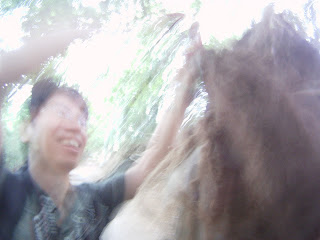 The important thing is that the Chinese guy did cut off one of my dreadlocks. He was quite taken with it, and seemed to want to keep it, so I decided to let him have it, as long as he exchanged something for it. 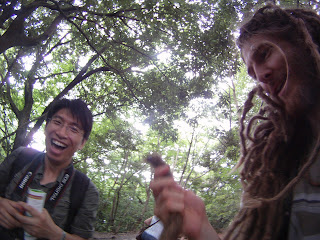 He and his wife accepted this, and wondered what they should give me in exchange. Then she said something along the lines of "What about the Little Bottle of Green Potion?" and produced from her bag a little green bottle containing a potent green liquid. 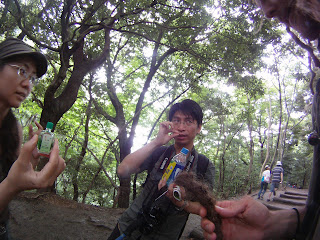 The couple explained at length the various uses for it. It keeps the mosquitoes and other insects away, they told me, soothes aching muscles and joints, and if you're feeling run down after a day of hiking, you can even imbibe a drop or two and it will re-energize you. The potion did all of these things very well, but they did not mention to me the side effect, which was that it made my backpack smell of a mixture of Deep Heat and very strong Root Beer. This smell defined for me the rest of that summer. A year later, there are still parts of my backpack that, when sniffed, take me straight back to the humid forests of Japan and the continued search for the next dreadlock removal.