A brush with an unknown religion

Walking along a road in the Hakone area, I happened upon a large temple complex with barbed wire along its walls. 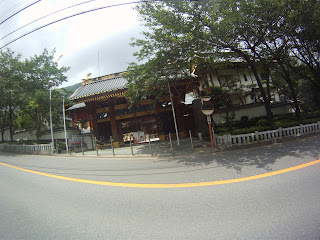 At the grand temple entrance gate were two signs , one in Japanese saying 信者の方々はどうぞお入り下さい "Believers, please come in" and one in English saying "I'm afraid you cannot enter here". I wondered at this dichotomy. It is interesting that anyone who does not read Japanese is fundamentally assumed to be a non-believer. What of those of us who can read English and Japanese? Which sign should we believe?


I went towards the gate to get a closer look and a photograph, and asked a lady who was standing there what the dichotomy was all about. She explained that since the complex was an "otera" (temple) and not a mere "jinja" (shrine), only adherants of this particular sect could come and worship there. I had never heard of this differentiation before, but I told her if that was the case, I would just look from the outside. She interpreted this to mean "please can I have a quick look inside" and after a quick nod of agreement from another lady, let me in for a quick look. 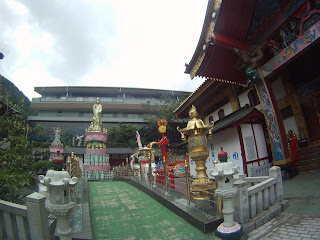 Inside was a courtyard filled with garish statues and buildings of opulence. Clearly this was a sect of some power with many followers.

I went back outside thanking the ladies, and met another lady who had just parked her car across the road. As I approached, she asked if I adhered to any religion, with an insinuation that my hair was rather long. I leapt at the chance for another dreadlock encounter, and elicited a more concrete hair-related comment. But when I proffered her the scissors, she gave me a typical Japanese smile-that-means-no, and refused point-blank to cut any of my hair. 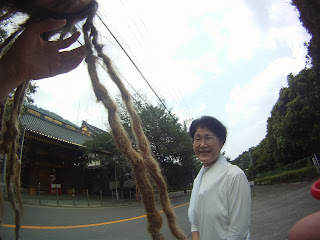 I pleaded, but she said no - it couldn't be just one. I asked what she would do if I asked her to cut off the whole lot, and she advised me to go to a hairdresser. 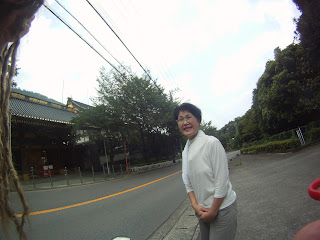 I asked again if she wouldn't just make one little snip. 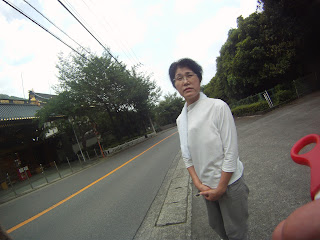 "What will you do with the hair when it's off?"

- We'll have to decide that together after you cut it. 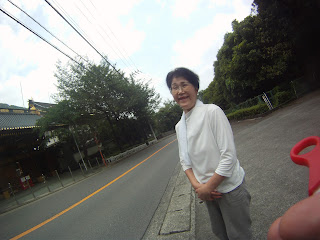 It seems that if the hair is on my head it is impressive, and if not, then it's rubbish. (why is the hair on the head not just as rubbish as the detached hair?)


Her final excuse was that she couldn't cut the hair here, in front of the temple, and she couldn't come and and cut it elsewhere because she had to work. 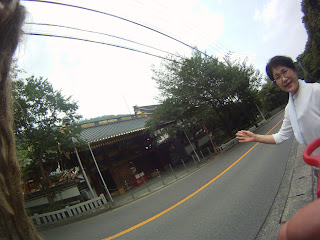 So that was that.


We said our farewells, and I left the temple having neither lightened my head nor enlightened my spirit.


Perhaps, I thought, I would find more enlightenment if I went for an onsen.